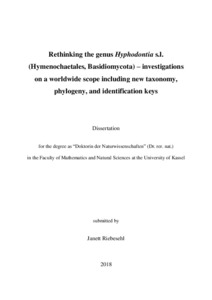 The dissertation “Rethinking the genus Hyphodontia s.l. (Hymenochaetales, Basidiomycota) – investigations on a worldwide scope including new taxonomy, phylogeny, and identification keys” was elaborated by Janett Riebesehl in the Department of Ecology at the University of Kassel.
Changing the classification system of the fungal genus Hyphodontia s.l. to treat the species from the broad Hyphodontia s.l. concept by a division into other genera was continued. Hjortstam and Ryvarden (2002, 2009) began the concept, but only took morphological features into account. This thesis revised the system and considered findings from molecular systematics. 35 new combinations were formulated. New identification keys were prepared, according to the new genera classifications. Overall, 37 DNA sequences were obtained and made publicly available on NCBI GenBank. The first generated sequences were successful for 13 species, and sequences of holotype material for 12 species, with regard to the fungal barcode ITS. It was possible to describe five new species out of collections from Brazil, La Réunion and Taiwan: Hyphodontia borbonica, Lyomyces allantosporus, Lyomyces mascarensis, Lyomyces organensis and Lyomyces orientalis. Furthermore, the distribution of Hyphodontia s.l. species in Central Asia was investigated.

Except where otherwise noted, this item's license is described as Namensnennung-Keine Bearbeitung 3.0 Deutschland