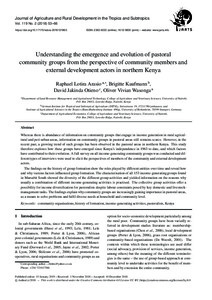 Whereas there is abundance of information on community groups that engage in income generation in rural agricultural and peri-urban areas, information on community groups in pastoral areas still remains scarce. However, in the recent past, a growing trend of such groups has been observed in the pastoral areas in northern Kenya. This study therefore explores how these groups have emerged since Kenya’s independence in 1963 to date, and which factors have contributed to their evolution. A full survey on all income-generating community groups was conducted and different types of interviews were used to elicit the perspectives of members of the community and external development actors.

The findings on the history of group formation show the roles played by different entities over time and reveal how and why various factors influenced group formation. The characterisation of all 153 income-generating groups found in Marsabit South showed the diversity of the different group activities and yielded information on the reasons why usually a combination of different income-generating activities is practised. The collective group activities offer a possibility for income diversification for pastoralists despite labour constraints posed by key domestic and livestockmanagement tasks. The findings explain why community groups are increasingly gaining importance in pastoral areas, as a means to solve problems and fulfil diverse needs at household and community level.