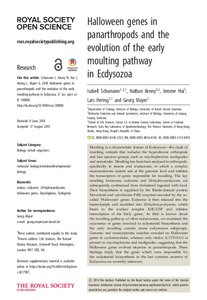 Moulting is a characteristic feature of Ecdysozoa—the clade of moulting animals that includes the hyperdiverse arthropods and less speciose groups, such as onychophorans, tardigrades and nematodes. Moulting has been best analysed in arthropods, specifically in insects and crustaceans, in which a complex neuroendocrine system acts at the genomic level and initiates the transcription of genes responsible for moulting. The key moulting hormones, ecdysone and 20-hydroxyecdysone, are subsequently synthesized from cholesterol ingested with food. Their biosynthesis is regulated by the Rieske-domain protein Neverland and cytochrome P450 enzymes encoded by the so-called ‘Halloween’ genes. Ecdysone is then released into the haemolymph and modified into 20-hydroxyecdysone, which binds to the nuclear receptor EcR/USP and initiates transcription of the Early genes. As little is known about the moulting pathway of other ecdysozoans, we examined the occurrence of genes involved in ecdysteroid biosynthesis and the early moulting cascade across ecdysozoan subgroups. Genomic and transcriptomic searches revealed no Halloween genes in cycloneuralians, whereas only shadow (CYP315A1) is present in onychophorans and tardigrades, suggesting that the Halloween genes evolved stepwise in panarthropods. These findings imply that the genes which were responsible for the ecdysteroid biosynthesis in the last common ancestor of Ecdysozoa are currently unknown.