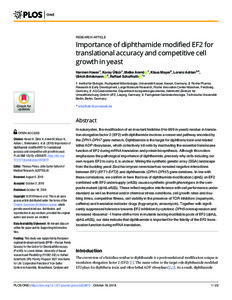 In eukaryotes, the modification of an invariant histidine (His-699 in yeast) residue in translation elongation factor 2 (EF2) with diphthamide involves a conserved pathway encoded by the DPH1-DPH7 gene network. Diphthamide is the target for diphtheria toxin and related lethal ADP ribosylases, which collectively kill cells by inactivating the essential translocase function of EF2 during mRNA translation and protein biosynthesis. Although this notion emphasizes the pathological importance of diphthamide, precisely why cells including our own require EF2 to carry it, is unclear. Mining the synthetic genetic array (SGA) landscape from the budding yeast Saccharomyces cerevisiae has revealed negative interactions between EF2 (EFT1-EFT2) and diphthamide (DPH1-DPH7) gene deletions. In line with these correlations, we confirm in here that loss of diphthamide modification (dphΔ) on EF2 combined with EF2 undersupply (eft2Δ) causes synthetic growth phenotypes in the composite mutant (dphΔ eft2Δ). These reflect negative interference with cell performance under standard as well as thermal and/or chemical stress conditions, cell growth rates and doubling times, competitive fitness, cell viability in the presence of TOR inhibitors (rapamycin, caffeine) and translation indicator drugs (hygromycin, anisomycin). Together with significantly suppressed tolerance towards EF2 inhibition by cytotoxic DPH5 overexpression and increased ribosomal -1 frame-shift errors in mutants lacking modifiable pools of EF2 (dphΔ, dphΔ eft2Δ), our data indicate that diphthamide is important for the fidelity of the EF2 translocation function during mRNA translation.