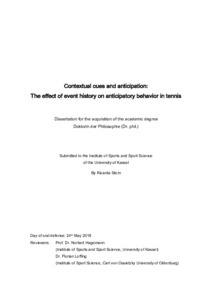 This dissertation examined the effect of event history on anticipatory behavior in tennis. The starting point of this work is that athletes rely on both kinematic cues from their opponent’s movements and contextual cues when anticipating opponent’s action intentions in time-constrained sport situations. Based on the assumption that the outcome of previous events depicts a relevant contextual cue which influences anticipation towards a subsequent event in time-constrained sport situations even in the presence of kinematic information, a tripartite research program was developed. The main goal of this research was to verify and extend existing research findings and thus, to contribute to a deeper understanding of the significance of non-kinematic, contextual cues within the anticipation process.
Results showed that visual anticipation of action outcomes in time-constrained sport situations is affected by expectations based on the outcome of previous events even in the presence of kinematic information. Incorporating outcomes of previous events as a source of information can therefore benefit successful anticipation; however, overreliance on patterns in an opponent’s previous actions may also be detrimental to anticipation in situations where an action’s outcome does not correspond to a previous observed pattern. Overall, findings of the present research confirm that event history depicts a relevant contextual cue when making predictions about an opponent’s action intentions.

Except where otherwise noted, this item's license is described as Namensnennung 3.0 Deutschland