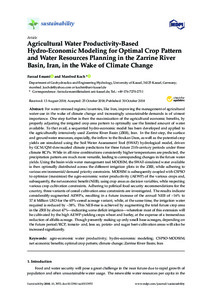 For water-stressed regions/countries, like Iran, improving the management of agricultural water-use in the wake of climate change and increasingly unsustainable demands is of utmost importance. One step further is then the maximization of the agricultural economic benefits, by properly adjusting the irrigated crop area pattern to optimally use the limited amount of water available. To that avail, a sequential hydro-economic model has been developed and applied to the agriculturally intensively used Zarrine River Basin (ZRB), Iran. In the first step, the surface and groundwater resources, especially, the inflow to the Boukan Dam, as well as the potential crop yields are simulated using the Soil Water Assessment Tool (SWAT) hydrological model, driven by GCM/QM-downscaled climate predictions for three future 21th-century periods under three climate RCPs. While in all nine combinations consistently higher temperatures are predicted, the precipitation pattern are much more versatile, leading to corresponding changes in the future water yields. Using the basin-wide water management tool MODSIM, the SWAT-simulated water available is then optimally distributed across the different irrigation plots in the ZRB, while adhering to various environmental/demand priority constraints. MODSIM is subsequently coupled with CSPSO to optimize (maximize) the agro-economic water productivity (AEWP) of the various crops and, subsequently, the net economic benefit (NEB), using crop areas as decision variables, while respecting various crop cultivation constraints. Adhering to political food security recommendations for the country, three variants of cereal cultivation area constraints are investigated. The results indicate considerably-augmented AEWPs, resulting in a future increase of the annual NEB of ~16% to 37.4 Million USD for the 65%-cereal acreage variant, while, at the same time, the irrigation water required is reduced by ~38%. This NEB-rise is achieved by augmenting the total future crop area in the ZRB by about 47%—indicating some deficit irrigation—wherefore most of this extension will be cultivated by the high AEWP-yielding crops wheat and barley, at the expense of a tremendous reduction of alfalfa acreage. Though presently making up only small base acreages, depending on the future period/RCP, tomato- and, less so, potato- and sugar beet-cultivation areas will also be increased significantly.