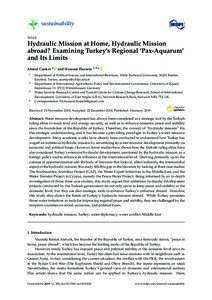 Water resource development has always been considered as a strategic tool by the Turkish ruling elites to reach food and energy security, as well as to enhance domestic peace and stability since the foundation of the Republic of Turkey. Therefore, the concept of “hydraulic mission” fits this strategic understanding, and it has become a prevailing paradigm in Turkey’s water resource development. Many academic works have already been conducted to understand how Turkey has waged an ambitious hydraulic mission by securitizing its water resource development primarily on economic and political bases. However, fewer studies have shown how the Turkish ruling elites have also considered Turkey’s extensive hydraulic development, sanctioned by the hydraulic mission, as a foreign policy tool to enhance its influence at the international level. Drawing primarily upon the concept of opportunitisation and the body of literature that looks at, albeit indirectly, the international aspect of the hydraulic mission, this study fills this gap in the literature by looking at three case studies: The Southeastern Anatolian Project (GAP), the Water Export Initiatives to the Middle East, and the Water Transfer Project to Cyprus, namely the Peace Water Project. Being informed by an in-depth investigation of those three case studies, this study argues that ambitious hydraulic development projects conducted by the Turkish government do not only serve to keep peace and stability at the domestic level, but they are also strategic tools to enhance Turkey’s influence abroad. However, this study also shows the limits of Turkey’s hydraulic mission abroad. While Turkey promotes those water initiatives as tools for improving regional peace and stability, they are challenged by the recipient countries on social, economic, and political bases.