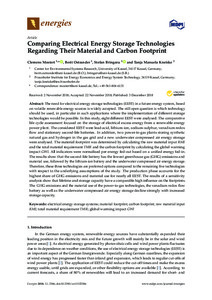 The need for electrical energy storage technologies (EEST) in a future energy system, based on volatile renewable energy sources is widely accepted. The still open question is which technology should be used, in particular in such applications where the implementation of different storage technologies would be possible. In this study, eight different EEST were analysed. The comparative life cycle assessment focused on the storage of electrical excess energy from a renewable energy power plant. The considered EEST were lead-acid, lithium-ion, sodium-sulphur, vanadium redox flow and stationary second-life batteries. In addition, two power-to-gas plants storing synthetic natural gas and hydrogen in the gas grid and a new underwater compressed air energy storage were analysed. The material footprint was determined by calculating the raw material input RMI and the total material requirement TMR and the carbon footprint by calculating the global warming impact GWI. All indicators were normalised per energy fed-out based on a unified energy fed-in. The results show that the second-life battery has the lowest greenhouse gas (GHG) emissions and material use, followed by the lithium-ion battery and the underwater compressed air energy storage. Therefore, these three technologies are preferred options compared to the remaining five technologies with respect to the underlying assumptions of the study. The production phase accounts for the highest share of GHG emissions and material use for nearly all EEST. The results of a sensitivity analysis show that lifetime and storage capacity have a comparable high influence on the footprints. The GHG emissions and the material use of the power-to-gas technologies, the vanadium redox flow battery as well as the underwater compressed air energy storage decline strongly with increased storage capacity.