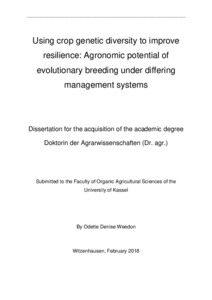 Mainly within organic and low-input cropping systems, evolutionary breeding based on the creation of heterogeneous evolving composite cross populations (CCPs) has been gaining attention. The aim of this dissertation is to assess the agronomic potential and yield stability of wheat CCPs in comparison to pure line varieties under differing management systems.
Three winter wheat CCPs were created in the UK in 2001, based on parental varieties that were selected for either their high yield or baking quality. The baking Quality CCP (CCQ) was developed through the crossing of 12 high baking quality parental varieties, whilst the Yield CCP (CCY) was created through the crossing of 9 parental varieties selected for their yielding ability. The final CCP (CCYQ) was created through the crossing of all twenty parental varieties. A number of agronomic and morphological parameters have been recorded over eleven generations (until the F15), providing an historical dataset with which the agronomic potential and yield stability of the CCPs could be assessed and compared to pure line varieties under differing management systems. In addition, a two-year experiment looking at the adaptation of the YQCCPs to changing environments, based on the assessment of agronomic, morphological and baking quality parameters, is reported on for the experimental years of 2013/14 and 2014/15. CCPs with a wider genetic base (CCYQs) indicated both better yields and stability in comparison to the other CCPs, supporting the premise that increased genetic diversity may help to buffer environmental stresses, particularly under challenging conditions. Additionally, the CCYs, whose parental set included more modern varieties were able to make better use of the higher N inputs in the conventional system. However, the CCY CCPs, tended to be the most reactive populations indicating an apparent divergent evolution for both yield and yield stability between parallel populations under conventional conditions. CCYQ populations that had been subjected to changing environmental conditions (cycling) for five years remained similar for a number of important agronomic parameters such as yield; however, some differentiation for morphological characteristics such as degree of awnedness and kernel colour was found.
The results of the dissertation show the potential of CCPs, not only in terms of yield and yield stability, but also as an alternative option to pure line varieties for baking quality. However, evolutionary breeding should not be seen as a static tool with which to solve all problems. CCP adaptation to specific environments may be improved through the introduction of modern breeding progress through the mixing and crossing of newer varieties or elite lines into genetically diverse populations or through the selection of genotypes within populations better suited to a given environment.