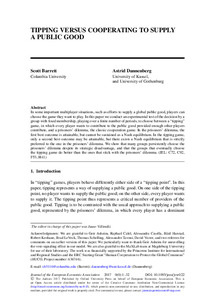 Tipping Versus Cooperating to Supply a Public Good

In some important multiplayer situations, such as efforts to supply a global public good, players can choose the game they want to play. In this paper we conduct an experimental test of the decision by a group with fixed membership, playing over a finite number of periods, to choose between a “tipping” game, in which every player wants to contribute to the public good provided enough other players contribute, and a prisoners’ dilemma, the classic cooperation game. In the prisoners’ dilemma, the first best outcome is attainable, but cannot be sustained as a Nash equilibrium. In the tipping game, only a second best outcome may be attainable, but there exists a Nash equilibrium that is strictly preferred to the one in the prisoners’ dilemma. We show that many groups persistently choose the prisoners’ dilemma despite its strategic disadvantage, and that the groups that eventually choose the tipping game do better than the ones that stick with the prisoners’ dilemma. (JEL: C72, C92, F53, H41)