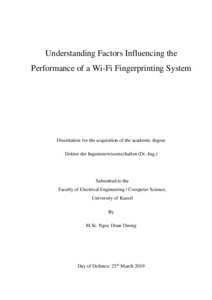 Understanding Factors Influencing the Performance of a Wi-Fi Fingerprinting System