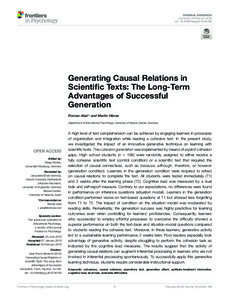 A high level of text comprehension can be achieved by engaging learners in processes of organization and integration while reading a cohesive text. In the present study, we investigated the impact of an innovative generative technique on learning with scientific texts. The cohesion generation was implemented by means of explicit cohesion gaps. High school students (n = 199) were randomly assigned to either receive a fully cohesive scientific text (control condition) or a scientific text that required the selection of causal connectives, such as because, although, therefore, or however (generation condition). Learners in the generation condition were required to reflect on causal relations to complete the text. All students were tested immediately (T1) and 2 weeks after the learning phase (T2). Cognitive load was measured by a dual task and self-report measure. Contrary to our expectations, no differences were found in performance on inference questions (situation model). Learners in the generation condition performed worse on text-based questions at T1 but showed less forgetting from T1 to T2. The impact of condition on the situation model was moderated by reading skills. Remarkably, the generation success was highly predictive for learning outcomes even when controlling for learners’ proficiencies. Consequently, learners who succeeded to employ effortful processes to overcome the difficulty showed a superior performance on both the text-base and situation-model questions compared to students reading the cohesive text. Moreover, in these learners, generative activity led to a sustainable learning performance 2 weeks later. Poor readers especially took advantage of generative activity, despite struggling to perform the cohesion task as indicated by the cognitive load measures. The results suggest that the activity of generating causal relations can augment inferential processing in learners who are not involved in inferential processing spontaneously. To successfully apply this generative learning technique, students require considerable instructional support.