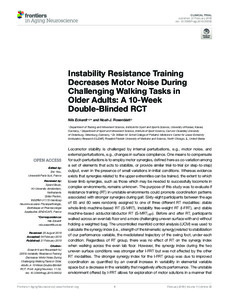 Locomotor stability is challenged by internal perturbations, e.g., motor noise, and external perturbations, e.g., changes in surface compliance. One means to compensate for such perturbations is to employ motor synergies, defined here as co-variation among a set of elements that acts to stabilize, or provide similar trial-to-trial (or step-to-step) output, even in the presence of small variations in initial conditions. Whereas evidence exists that synergies related to the upper extremities can be trained, the extent to which lower limb synergies, such as those which may be needed to successfully locomote in complex environments, remains unknown. The purpose of this study was to evaluate if resistance training (RT) in unstable environments could promote coordination patterns associated with stronger synergies during gait. Sixty-eight participants between the age of 65 and 80 were randomly assigned to one of three different RT modalities: stable whole-limb machine-based RT (S-MRT), instability free-weight RT (I-FRT), and stable machine-based adductor/abductor RT (S-MRTHIP). Before and after RT, participants walked across an even lab floor and a more challenging uneven surface with and without holding a weighted bag. The uncontrolled manifold control analysis (UCM) was used to calculate the synergy index (i.e., strength of the kinematic synergy) related to stabilization of our performance variable, the mediolateral trajectory of the swing foot, under each condition. Regardless of RT group, there was no effect of RT on the synergy index when walking across the even lab floor. However, the synergy index during the two uneven surface conditions was stronger after I-FRT but was not affected by the other RT modalities. The stronger synergy index for the I-FRT group was due to improved coordination as quantified by an overall increase in variability in elemental variable space but a decrease in the variability that negatively affects performance. The unstable environment offered by I-FRT allows for exploration of motor solutions in a manner that appears to transfer to challenging locomotor tasks. Introducing tasks that promote, rather than limit, exploration of motor solutions seems to be a valuable exercise modality to strengthen kinematic synergies that cannot be achieved with traditional strengthening paradigms (e.g., S-MRT).