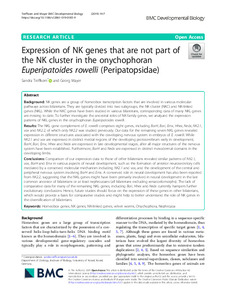 Background :
NK genes are a group of homeobox transcription factors that are involved in various molecular pathways across bilaterians. They are typically divided into two subgroups, the NK cluster (NKC) and NK-linked genes (NKL). While the NKC genes have been studied in various bilaterians, corresponding data of many NKL genes are missing to date. To further investigate the ancestral roles of NK family genes, we analyzed the expression patterns of NKL genes in the onychophoran Euperipatoides rowelli.

Results:
The NKL gene complement of E. rowelli comprises eight genes, including BarH, Bari, Emx, Hhex, Nedx, NK2.1, vax and NK2.2, of which only NK2.2 was studied previously. Our data for the remaining seven NKL genes revealed expression in different structures associated with the developing nervous system in embryos of E. rowelli. While NK2.1 and vax are expressed in distinct medial regions of the developing protocerebrum early in development, BarH, Bari, Emx, Hhex and Nedx are expressed in late developmental stages, after all major structures of the nervous system have been established. Furthermore, BarH and Nedx are expressed in distinct mesodermal domains in the developing limbs.

Conclusions:
Comparison of our expression data to those of other bilaterians revealed similar patterns of NK2.1, vax, BarH and Emx in various aspects of neural development, such as the formation of anterior neurosecretory cells mediated by a conserved molecular mechanism including NK2.1 and vax, and the development of the central and peripheral nervous system involving BarH and Emx. A conserved role in neural development has also been reported from NK2.2, suggesting that the NKL genes might have been primarily involved in neural development in the last common ancestor of bilaterians or at least nephrozoans (all bilaterians excluding xenacoelomorphs). The lack of comparative data for many of the remaining NKL genes, including Bari, Hhex and Nedx currently hampers further evolutionary conclusions. Hence, future studies should focus on the expression of these genes in other bilaterians, which would provide a basis for comparative studies and might help to better understand the role of NK genes in the diversification of bilaterians.