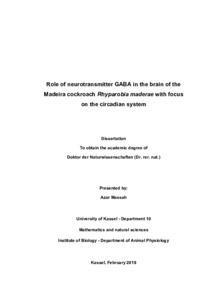 All living things are subject to biological rhythms. Circadian rhythms are generated by internal clocks which influence many biochemical and physiological processes, as well as various behaviors of an organism. These oscillators are synchronized by external "Zeitgeber" signals such as light-dark changes, temperature changes, as well as social contacts. Different studies identified the accessory medulla (AME), small neuropil at the ventromedian edge of the medulla, as the circadian pacemaker center of the cockroach Rhyparobia maderae. The AME is associated with approximately 240 neurons that are categorized into seven soma groups, which express a strikingly high number of neuropeptides. The main aim of the present dissertation was to further identify and functionally characterize the neuronal circuitry of the AME of R. maderae, with a special focus on γ-aminobutyric acid (GABA)-expressing neurons. Previous studies showed that GABA-immunoreactive(-ir) fibers in the distal tract (DT) connect the AME to the medulla and about 29 GABA-ir neurons were localized near the accessory medulla. However, they never were assigned to the specific AME neurons and there were several open questions with regard to arborization patterns of GABA-ir neurons and their connections to the circadian network.
In the first part of this project I characterized the GABA-ir neurons in the brain. Regarding the circadian system, I showed that except for the anterior neurons, cells from all other soma groups of the AME expressed GABA. Next to the GABA-ir DT and the anterior fiber fan system, I discovered a new GABA-ir tract which I called medial layer fiber tract (MLFT). The GABA-ir MLFT is the third tract that strongly connected the AME to layer four of the medulla. GABA-ir fibers of the DT connect the AME to the medulla, only. I showed for the first time that the lamina organ, a putative extraretinal photoreceptor, is also GABA-ir. Regarding the optic lobe, neither photoreceptors nor lamina cells were GABA-ir, but GABA-ir medulla cells of different soma groups were found. GABA-ir neurons in the medulla might provide inhibitory feedback to the lamina and control information processing and adjust light sensitivity of the compound eyes. Additionally, basic distribution pattern of GABA immunoreactivity in the central brain provided important information for understanding the functional role of GABA in the different information processing circuitry in the brain of R. maderae.
In the second part of my thesis I was in search for a possible function of GABA and serotonin (5-HT) in the light entrainment pathway to the AME and performed multiple-label immunohistochemistry. GABA immunoreactivity in the lamina and the second layer of the medulla overlapped with terminals of the short- and long histaminergic photoreceptor neurons and. thus, could indicate possible synaptic connections in these regions. In the accessory laminae, which showed immunoreactivity to many neuropeptides, histamine immunoreactivity was absent. Additionally, I showed that GABA levels cycle in the optic lobes as well as in the DT day-time dependently. GABA-ir neurons associated with the AME showed colocalization with FMRFamide. FMRFamide showed colocalization with 5-HT and MIP in some lamina- and AME neurons. One large medium-sized PDF-ir cell colocalized with MIP and FMRFamide. For the first time, I showed that PDF lamina cells that coexpressed PDF and 5-HT projected via the anterior fiber fan from the lamina down to the AME, but not to the medulla. This pathway was the first ipsilateral input pathway from lamina neuropils that could be tracked to the AME. Double- and triple-labeled AME neurons found in the current project might indicate that the presence of different neurotransmitters in one neuron could have a cooperative function in the circadian clock.
In the third part, the role of GABA in the coupling of bilaterally symmetric accessory medullae was analyzed via backfills from the optic lobe in combination with immunohistochemistry. GABA was localized in contralateral projecting commissural medulla cells.
In the last part, in search for output areas of the circadian clock to target regions in the brain, backfill experiments form the thoracic ganglia, ocellus, and the neurohaemal organs were combined with immunohistochemistry using anti-PDF and anti-GABA antisera. I showed that large second-order- as well as 2 small multimodal ocellar neurons projected to the optic lobe and innervated the AME. The projections of the labeled ocellar neurons in the posterior optic tubercles, posterior optic commissure, lobula valley tract, and in the AME greatly overlapped with PDF and GABA immunoreactivity. I concluded that GABA might mediate ocellar entrainment of the AME. Interestingly, none of the neurosecretory cells in the brain were GABA-ir. However, the GABA-ir fibers were in close vicinity to the backfilled fibers of neurosecretory cells in the superior median- and superior lateral protocerebrum where PDF-ir fiber projections were present, which could indicate synaptic connections between the two systems. Finally, evidence was found that several regions in the brain, including the inferior lateral protocerebrum, the superior median protocerebrum, and the posterior optic tubercles which are GABA- and PDF-ir are potential premotor areas that relay circadian information to locomotor centers in the thoracic ganglia. In summary, I could contribute significantly to the characterization of the cockroach circadian clock network.