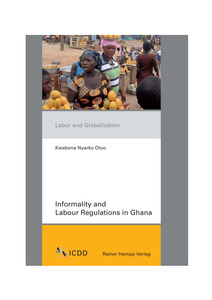 Informality and Labour Regulations in Ghana

The book makes a major contribution to the controversy about the factors driving the persistence and expansion of the informal economy. Unlike most others studies which either take a structuralist or an actor’s choice approach to the topic, this study combines a careful assessment of the economic, social and political circumstances promoting informality with a meticulously carried out econometric analysis of the dominant characteristics of workers as well as enterprises in the informal economy
in comparison to those in the formal economy. Its finding is that contrary to the neoliberal view, overregulation is not the primary driver of informality. Rather economic underdevelopment, which in turn is a result of the interplay of neoliberal policies and insufficient state capacity, is the main cause of informality.