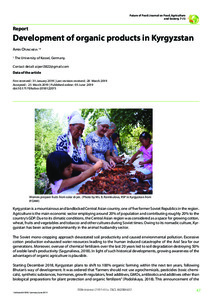 Development of organic products in Kyrgyzstan

Kyrgyzstan is a mountainous and landlocked Central Asian country, one of five former Soviet Republics in the region. Agriculture is the main economic sector employing around 20% of population and contributing roughly 20% to the country’s GDP. Due to its climatic conditions, the Central Asian region was considered as a space for growing cotton, wheat, fruits and vegetables and tobacco and other cultures during Soviet times. Owing to its nomadic culture, Kyrgyzstan has been active predominantly in the animal husbandry sector.