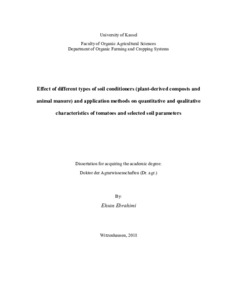 World population prospect has increased the need for food production, therefore ensuring the sustainable production of food has been of interest to researchers of agricultural sciences, as well as politicians, due to high demands by consumers in various countries in the world.
In this dissertation, we have investigated the effect of different types of composts, from residual biomass (household compost (HC), Spent mushroom compost (SMC) and Vermicompost (VC)), on different characteristics of plant and soil in organic production systems. Three separated experiments have been conducted in the field, laboratory and greenhouse, to investigate the effect of composts on agronomical characteristics of tomato and also their effect on suppression of Pythium ultimum.
The results of the first field trial indicated that different types of fertilizers (HC, SMC, VC and Cow manure (CM)) in different ‎‏rates (low, medium and high) and also with different methods of ‎application (row application and broad on the field) could impact on the final result in ‎‏organic tomato production.‎‏‎ Treatments with CM showed significantly higher tomato yield in the first year (103 t ha-1), however in the second year, SMC produced a higher yield (58 t ha-1). The experiment showed that VC could be effective to boost tomato production ‎with lower consumption of fertilizers. The proper rate of fertilizer application is dependent on the method of compost application. In general, compost broadened on the plots showed a higher yield production in cases with similar rates and compost type.
The aim of the second field trial was to evaluate under-root (U) method of VC application to improve yield characteristics of tomato and decrease the amount of fertilizer consumption in organic farming. The VC rates with the R and B methods of the application were 3, 6 and 9 t ha-1 and for the U method were 2, 4 and 6 t ha-1 at low, medium and high rates, respectively. The results showed that application of higher rates of VC with R (92 and 63 t ha-1 in 2014 and 2015, respectively) and medium rates of U (94 and 57 t ha-1 in 2014 and 2015, respectively) method of application produced greater yields in both years. Treatments with more available VC produced more dry matter in both years. Also, treatments which have greater VC around the root area showed higher N uptake. This study showed that treatments with U method of application had 23 % higher N uptake as compared with the treatments where VC was broadened in the field (B). Nitrogen, phosphorus and potassium use efficiency have increased over 200 % in treatments with U application compared with the other methods of application.
The study of the suppressive potential of different composts in the laboratory and greenhouse illustrated that all composts had a suppressive effect on the P. ultimum, and HC had the most limiting effect on the mycelium. This experiment showed that a higher percentage of composts have a significantly more limiting effect on P. ultimum.
To conclude, the study demonstrated that composts can be a good solution to manage the industrial and municipal wastes by using their potential for agricultural production and soil improvement.