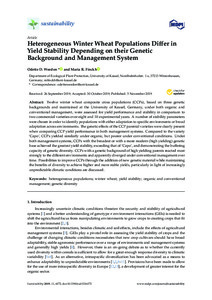 Twelve winter wheat composite cross populations (CCPs), based on three genetic backgrounds and maintained at the University of Kassel, Germany, under both organic and conventional management, were assessed for yield performance and stability in comparison to two commercial varieties over eight and 10 experimental years. A number of stability parameters were chosen in order to identify populations with either adaptation to specific environments or broad adaptation across environments. The genetic effects of the CCP parental varieties were clearly present when comparing CCP yield performance in both management systems. Compared to the variety ‘Capo’, CCPs yielded similarly under organic, but poorer under conventional conditions. Under both management systems, CCPs with the broadest or with a more modern (high yielding) genetic base achieved the greatest yield stability, exceeding that of ‘Capo’, and demonstrating the buffering capacity of genetic diversity. CCPs with a genetic background of high yielding parents reacted most strongly to the different environments and apparently diverged under conventional management over time. Possibilities to improve CCPs through the addition of new genetic material while maintaining the benefits of diversity to achieve higher and more stable yields, particularly in light of increasingly unpredictable climatic conditions are discussed.