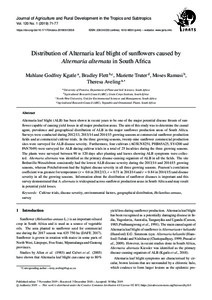 Alternaria leaf blight (ALB) has been shown in recent years to be one of the major potential disease threats of sunflower capable of causing yield losses in all major production areas. The aim of this study was to determine the causal agent, prevalence and geographical distribution of ALB in the major sunflower production areas of South Africa. Surveys were conducted during 2012/13, 2013/14 and 2014/15 growing seasons at commercial sunflower production fields and at commercial cultivar trials. In the three growing seasons, twenty-nine sunflower commercial production sites were surveyed for ALB disease severity. Furthermore, four cultivars (AGSUN8251, PHB65A25, SY4200 and PAN7049) were surveyed for ALB during cultivar trials in a total of 25 localities during the three growing seasons. The plants were surveyed between 90 to 120 days after planting and leaves showing ALB symptoms were collected. Alternaria alternata was identified as the primary disease-causing organism of ALB in all the fields. Wesselsbron consistently had the lowest ALB disease severity during the 2013/14 and 2014/15 growing seasons, whereas Potchefstroom had the highest disease severity in all three growing seasons. Pearson’s correlation coefficient was greatest for temperature (r=0.6 in 2012/13, r=0.71 in 2013/14 and r=0.84 in 2014/15) and disease severity in all the growing seasons. Information about the distribution of sunflower diseases is important and this survey demonstrated that A. alternata is widespread across sunflower production areas in South Africa and may result in potential yield losses.