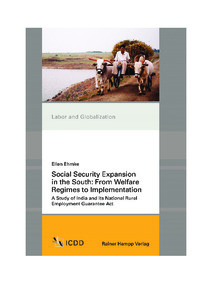 Social Security Expansion in the South: From Welfare Regimes to Implementation

The profound lack of social security for much of the world's population is increasingly recognised as a problem, both in policy making and in social sciences. Many new national and international policy initiatives aim at the expansion of social security and social protection in countries of the Global South. Correspondingly, academia is discussing the specific Southern nature of welfare arrangements and regimes, as well as the design of social protection systems. This book studies India as an exemplary case of social security expansion, Southern social policy development and welfare arrangements, with a focus on the National Rural Employment Guarantee Act (NREGA) and its implementation. Its politics of implementation approach builds on historical and ideational institutionalism as well as interpretative policy analysis. It highlights the importance of two previously neglected factors: ideational motives and implementation challenges. Whereas ideas have played an important role in the OECD welfare debates, Southern welfare studies have tended to overlook the importance of domestic ideas as shaping factors of social policy development. Putting ideas at the centre allows us to analyse Southern welfare regimes in their own right. In the South, policy implementation can be as important as its design for an explanation of its reach. Moreover, the implementation process is often a central – if not the only – arena in which (poor) citizens interact with the state. It is a politicised and contested arena.