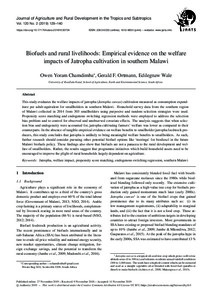 Biofuels and livelihoods: Empirical findings on the welfare impacts of Jatropha cultivation in the Mangochi district, Southern Malawi

This study evaluates the welfare impacts of jatropha (Jatropha carcus) cultivation measured as consumption expenditure per adult-equivalent for smallholders in southern Malawi. Household survey data from the southern region of Malawi collected in 2014 from 303 smallholders using purposive and random selection strategies were used. Propensity score matching and endogenous switching regression methods were employed to address the selection bias problem and to control for observed and unobserved covariate effects. The analysis suggests that when selection bias and endogeneity were accounted for, jatropha cultivating farmers' welfare was lower as compared to their counterparts. In the absence of tangible empirical evidence on welfare benefits to smallholder jatropha feedstock producers, this study concludes that jatropha is unlikely to bring meaningful welfare benefits to smallholders. As such, further research should consider pursuing other potential biofuel options like ‘moringa” for biodiesel in the future Malawi biofuels policy. These findings also show that biofuels are not a panacea to the rural development and welfare of smallholders. Rather, the results suggest that programme initiatives which build household assets need to be encouraged to improve the plight of rural households largely dependent on agriculture.