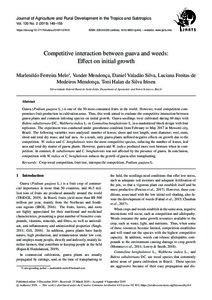 Competitive interaction between guava and weeds: Effect on initial growth

Guava (Psidium guajava L.) is one of the 50 most consumed fruits in the world. However, weed competition compromises fruit production in cultivation areas. Thus, this work aimed to evaluate the competitive interaction between guava plants and common infesting species on initial growth. Guava seedlings were cultivated during 60 days with Bidens subalternans DC., Waltheria indica L. or Commelina benghalensis L. in a randomized block design with four replicates. The experiment was conducted under greenhouse condition from February to May 2017 in Mossoró city, Brazil. The following variables were analysed: number of leaves; shoot and root length; stem diameter; root, stem, shoot and total dry mass; and leaf area. As a result, only guava plants suffered negative effects on growth due to the competition. W. indica and C. benghalensis were the most competitive species, reducing the number of leaves, leaf area and total dry matter of guava plants. However, guava and W. indica produced more root biomass when in competition. In contrast, B. subalternans and C. benghalensis was not affected by the presence of guava. In conclusion, competition with W. indica or C. benghalensis reduces the growth of guava after transplanting.