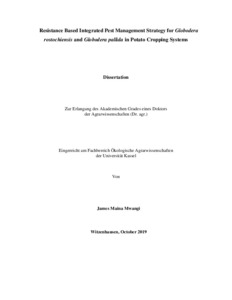 Potato cyst nematodes (PCN), Globodera rostochiensis and G. pallida are important potato pests responsible for high yield losses globally. The ability of PCN to persist in the soil for a long time makes their management challenging and therefore these nematodes are under strict quarantine regulations in many countries. Nevertheless, both PCN species have recently been reported in potato cropping systems in Kenya. Resistant potato cultivars reduce nematode densities in the field below damage threshold levels and thus help mitigate yield losses. However, utilization of resistant potato cultivars is affected by lack of information about PCN populations present, lack of adequate resistant cultivars and fears of virulence selection. The main objective of this study was to investigate ways of enhancing the use of resistant potato cultivars in the management of PCN in Kenya.
One main task for the successful implementation of resistant potato cultivars is knowledge about the PCN population(s) present in the field. The Kenyan populations of G. rostochiensis were therefore studied in glasshouse and laboratory experiments, which confirmed that they lack obligatory diapause and are unable to reproduce on potato cultivars carrying the H1 resistance gene resulting in the classification as Ro1/4 pathotype. Potato cultivars carrying this gene were found suitable for use in PCN management. However, care should be taken when using resistant cultivars in the management of G. rostochiensis in Kenya to avoid selection and proliferation of G. pallida which is present in the country, but still at low frequency.
Further studies showed that Kenyan populations of G. rostochiensis have low genetic variability. Heterozygote deficit was found in some of the populations that was attributed to bottleneck effects following recent introduction(s). The structure of these populations differed from all populations they were compared to and the putative source of Kenyan populations could not be ascertained in this study. Further investigations are needed including additional European populations and from around the world, to identify the routes of introduction of Kenyan PCN.
Studies of a selected virulent G. pallida population, ‘Oberlangen’, showed that the increase in virulence resulted from the ability of juveniles to moult and develop into females since the hatching and penetration of this population on resistant cultivars was similar to the avirulent reference population ‘Chavornay’. Differences in life history traits of ‘Oberlangen’ versus the reference population ‘Chavornay’ could not be attributed to increased virulence. However, comparison of cyst diameters of virulent and avirulent populations showed a positive correlation with virulence. Cultivars tested for potential resistance to ‘Oberlangen’ were susceptible, but suppressed the reproduction of ‘Chavornay’. Therefore, there is a need for enhanced breeding for resistance to the new virulence type ‘Oberlangen’ and other virulent populations reported. ‘Oberlangen’ can serve as a future reference population for testing breeding materials for resistance to the new G. pallida virulence type.
To enhance the breeding process, tissue culture (TC) derived potato plants were evaluated in phenotyping experiments. The TC derived plants supported the reproduction of PCN and they were therefore suitable and highly effective for resistance screening. Resistance assessment can be done in different pot volumes, provided the average inoculum density of 5 eggs and J2s ml-1 soil is applied within seven days of planting. Furthermore, the results obtained with TC plants were comparable with those obtained using the EPPO standard protocol. Visual assessment of white females on the pot surface could be a quick way of identifying susceptible genotypes that can then be discarded. Tissue culture plants can enhance the screening process and significantly lower the associated cost making them for a valuable tool for enhancing the breeding process in Kenya.
In conclusion, this study has generated important information about the Kenyan populations of G. rostochiensis in support of a sustainable management. If used properly, resistant potato cultivars can manage these populations and selection of virulent populations can be avoided. Furthermore, G. pallida must be contained to reduce the risk of spreading throughout Kenya. To achieve this, monitoring, quarantine measures, crop rotation and trap cropping amongst others should be enforced. Lastly, the screening test system developed in this study will goes a long way in enhancing breeding for PCN resistance.