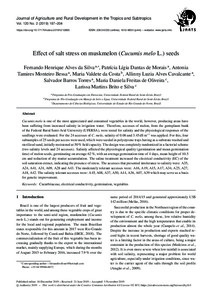 Cucumis melo is one of the most appreciated and consumed vegetables in the world, however, producing areas have been suffering from increased salinity in irrigation water. Therefore, accesses of melon, from the germplasm bank of the Federal Rural Semi-Arid University (UFERSA), were tested for salinity and the physiological responses of the seedlings were evaluated. For the 24 accesses of C. melo, salinity of 0.06 and 3.45 dS m-1 was applied. For this, four subsamples of 25 seeds per access were used, which were seeded in polystyrene trays having as a substrate washed and sterilized sand, initially moistened at 50% field capacity. The design was completely randomized in a factorial scheme (two salinity levels and 24 accesses). Salinity affected the physiological quality (germination and mean germination time) of melon seeds, germinating on average 62%, with an average germination time of 4 days, mean height of 10.5 cm and reduction of dry matter accumulation. The saline treatment increased the EC of the soil saturation extract, indicating the presence of stress. The accesses that presented intolerance to salinity were: A35, A24, A41, A31, A09, A28 and A43. The moderately tolerant accesses were: A16, A19, A15, A17, A34, A25, A27, A18, A42. The salinity tolerant accesses were: A45, A08, A37, A50, A14, A36, A07, A39 which may serve as a basis for genetic improvement.