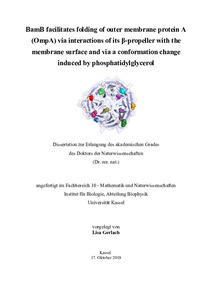 A sufficient folding and insertion of OMPs into the OM of Gram-negative bacteria requires the conserved β-barrel assembly machinery (BAM) complex. The present thesis concerns the structural properties and folding behavior of the lipoprotein BamB and describes its relevance in the synchronized mechanism of membrane insertion and folding of the β-barrel protein OmpA. Furthermore, specific binding sites in BamB involved in the interaction to the lipid membrane or the periplasmic domain of BamA (PD-BamA) were identified extending the current knowledge on the individual role of BamB in OMP assembly. In a first study, structural properties of BamB and the association of the lipoprotein with the lipid membrane were investigated. CD spectroscopy indicated that the presence of lipid membranes is not required for the formation of secondary structure of BamB developing a stable native-like structure at pH > 5 in aqueous solution. The content of α-helix increased at the expense of β-sheet structure in the presence of DLPG lipid bilayers demonstrating a dependence of the structure formation on negatively charged lipids. A detailed fluorescence study showed an interaction between BamB and DLPG but less binding to neutral lipid membranes (DLPC). BamB was shown to precisely interact with the lipid membrane in specific regions near the N-terminal cysteine involving β-blades 1, 2 and 3 of the β-propeller forming a binding triangle and an essential protein-lipid interface. The described observations indicated that a structural change of BamB and the presence of PG in the lipid membrane are required for proper membrane binding and function of BamB. In the second part of this thesis, folding kinetics of OmpA into preformed lipid bilayers have been described. For the sufficient insertion of OmpA into mainly negatively charged lipid bilayers, a neutral electrostatic potential of the membrane was required which was shown to be mediated by the addition of NaCl facilitating the adsorption of OmpA to the lipid membrane surface. In the presence of BamB, the folding kinetics of OmpA were improved when folded into lipid bilayers containing PG, making the conformation change of BamB and its preferred interaction to PG functional relevant for the assisted folding of OMPs. BamB was presumed be involved in the arrangement of a neutral surface potential by covering the negative charges of the PG head groups similar to NaCl. In a third study, site-specific fluorescence studies suggested a relevant correlation between the presence of a lipid bilayer and the dynamic interaction of BamB and PD-BamA. FRET demonstrated binding of BamB to PD-BamA without major conformational changes in BamB. The shortest D-A distances were obtained for regions localized near the N-terminus of BamB in the presence of lipid bilayers indicating a stabilization of the associated proteins at the membrane surface.