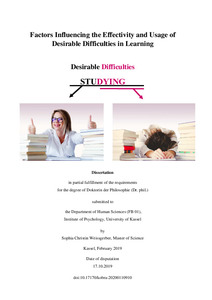 Factors Influencing the Effectivity and Usage of Desirable Difficulties in Learning

What circumstantial factors or personality factors influence the effectivity of desirable difficulties, and correspondingly, the attitudes to and the usage of desirable difficulties? The dissertation covers externally regulated (laboratory and classroom) and self-regulated learning and starts with a brief introduction of the concept of desirable difficulties and a literature review of selected papers on disfluency, interleaving and spacing, as well as testing and generation. The literature review focuses on effectivity criteria with practical relevance for realistic learning and teaching contexts: In particular, I consider learning conditions, learning materials, student characteristics, and learning outcomes.
Due to the fickle nature of the disfluency phenomenon and the search for potential moderators, my first empirical study aimed to identify factors influencing the robustness and desirability of disfluent texts (Appendix A). The findings emphasize that the effectivity of disfluency can depend on the type of disfluency manipulation and the time point of a performance test—that is, how disfluency is implemented and when disfluency’s effects unfold—both are factors that influence disfluency’s benefits for learning. The following discussion of the disfluency effect also concerned theoretical aspects. If the disfluency effect exists, current accounts are less successful in predicting moderators and conditions under which disfluency effectively improves learning. I propose that theoretical rethinking may be necessary to uncover if and under which circumstances disfluent fonts may act as a desirable difficulty.
I moved then to the empirically well-established desirable difficulties. Given a multitude of empirical studies on the spacing and interleaving effect, I merely summarize moderators and effectivity conditions. Substantial research on the testing effect is then presented. The testing effect is followed by considerations of the generation-effect, because both are related. Yet, effectivity conditions and moderators are less well known. Since discussions about learners’ characteristics as moderators have so far been centered on previous knowledge and cognitive-load aspects, I (together with two colleagues) examined the role of a motivational variable and explored whether individual differences in performance expectancies influence the benefits of problem-solving as generative activity on delayed test performance (Appendix B). The desirability of problem-solving unfolds immediately for learners with higher performance expectancies but is delayed for learners with lower performance expectancies. Motivational aspects beyond cognitive aspects such as previous knowledge are relevant to the desirability of difficulties over time.
After establishing and reviewing the effectivity of desirable difficulties in externally regulated contexts, the focus shifts to self-regulated learning. The role of learner characteristics is emphasized. Since learners’ judgments guide their study decisions and given that desirable difficulties are potent learning tools, the question arises about which learners favorably judge and utilize desirable difficulties when learning on their own? In multiple correlational studies, I (together with two colleagues) examined how cognitive-motivational differences relate to attitudes and self-reported use of empirically supported desirable difficulties. It was shown that learners with a predisposition to think (need for cognition) are more prone to use generation-related desirable difficulties (Appendix C), and learners with a mastery orientation more generally like and report greater use of various desirable difficulties (Appendix D). Likewise, learners with lower levels of test anxiety indicated greater adoption of self-testing relative to repetition techniques, which is also associated with higher exam grades (Appendix E). Moreover, different learner characteristics (math competence and math anxiety) can interact and differentially influenced long-term learning success (Appendix F).
In the following discussion section, I briefly addressed a research gap apparent in the current literature. It concerns missing experimental conditions with greater ecological validity relevant for the interpretation of the practical effectiveness of desirable difficulties. The implication of my discussion concerned the validity of current learning recommendations.

Except where otherwise noted, this item's license is described as Namensnennung-Nicht-kommerziell 3.0 Deutschland