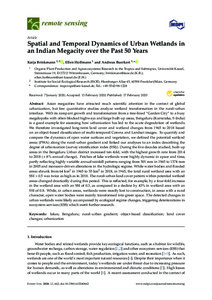 Asian megacities have attracted much scientific attention in the context of global urbanization, but few quantitative studies analyze wetland transformation in the rural–urban interface. With its rampant growth and transformation from a tree-lined “Garden City” to a busy megalopolis with often-blocked highways and large built-up areas, Bengaluru (Karnataka, S-India) is a good example for assessing how urbanization has led to the acute degradation of wetlands. We therefore investigated long-term land cover and wetland changes from 1965 to 2018 based on an object-based classification of multi-temporal Corona and Landsat images. To quantify and compare the dynamics of open water surfaces and vegetation, we defined the potential wetland areas (PWA) along the rural–urban gradient and linked our analyses to an index describing the degree of urbanization (survey stratification index (SSI)). During the five decades studied, built-up areas in the Bengaluru Urban district increased ten-fold, with the highest growth rate from 2014 to 2018 (+ 8% annual change). Patches of lake wetlands were highly dynamic in space and time, partly reflecting highly variable annual rainfall patterns ranging from 501 mm in 1965 to 1374 mm in 2005 and monsoon-driven alterations in the hydrologic regime. While water bodies and flooded areas shrunk from 64 km2 in 1965 to 55 km2 in 2018, in 1965, the total rural wetland area with an SSI > 0.5 was twice as high as in 2018. The rural–urban land cover pattern within potential wetland areas changed drastically during this period. This is reflected, for example, by a four-fold increase in the wetland area with an SSI of 0.3, as compared to a decline by 43% in wetland area with an SSI of 0.8. While, in urban areas, wetlands were mostly lost to construction, in areas with a rural character, open water bodies were mainly transformed into green space. The detected changes in urban wetlands were likely accompanied by ecological regime changes, triggering deteriorations in ecosystem services (ESS) which merit further research.