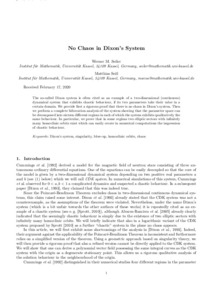 No Chaos in Dixon's System

The so-called Dixon system is often cited as an example of a two-dimensional (continuous) dynamical system that exhibits chaotic behaviour, if its two parameters take their value in a certain domain. We provide first a rigorous proof that there is no chaos in Dixon's system. Then we perform a complete bifurcation analysis of the system showing that the parameter space can be decomposed into sixteen different regions in each of which the system exhibits qualitatively the same behaviour. In particular, we prove that in some regions two elliptic sectors with infinitely many homoclinic orbits exist which can easily create in numerical computations the impression of chaotic behaviour.