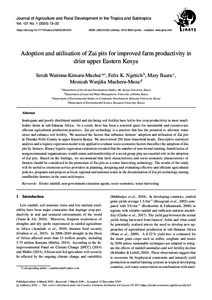 Inadequate and poorly distributed rainfall and declining soil fertility have led to low crop productivity in most smallholder farms in sub-Saharan Africa. As a result, there has been a renewed quest for sustainable and resource-use efficient agricultural production practices. Zai pit technology is a practice that has the potential to alleviate water stress and enhance soil fertility. We assessed the factors that influence farmers' adoption and utilisation of Zai pits in Tharaka-Nithi County in upper Eastern Kenya. We interviewed 291 farm household heads. Descriptive statistical analysis and a logistic regression model were applied to evaluate socio-economic factors that affect the adoption of Zai pits by farmers. Binary logistic regression estimation revealed that the number of non-formal training, beneficiaries of nongovernmental organisations, wealth status and membership of a social group play an essential role in the adoption of Zai pits. Based on the findings, we recommend that farm characteristics and socio-economic characteristics of farmers should be considered in the promotion of Zai pits as a water harvesting technology. The results of the study will be useful to extension service providers in planning, designing and evaluating effective and efficient agricultural policies, programs and projects at local, regional and national scales in the dissemination of Zai pit technology among smallholder farmers in the semi-arid tropics.