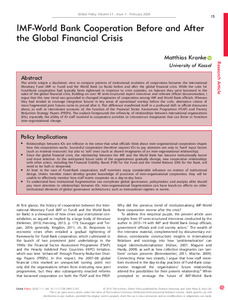 IMF‐World Bank Cooperation Before and After the Global Financial Crisis

This article adopts a diachronic view to compare patterns of institutional evolution of cooperation between the International Monetary Fund (IMF or Fund) and the World Bank (or Bank) before and after the global financial crisis. While the rules for Fund‐Bank cooperation had typically been tightened in response to crisis episodes, on balance they were loosened in the wake of the global financial crisis. Building on over 90 semi‐structured expert interviews and relevant official documentation, I argue that this new trend was grounded in changed imaginaries of cooperation among IMF and World Bank officials. Whereas they had tended to envisage integrative futures in key areas of operational overlap before the crisis, alternative visions of more fragmented joint futures came to prevail after it. This difference manifested itself in a profound shift in official discourses about, as well as interviewee accounts of, the function of the Financial Sector Assessment Programme (FSAP) and Poverty Reduction Strategy Papers (PRSPs). The analysis foregrounds the reflexivity of relationships between international organisations (IOs), especially the ability of IO staff involved in cooperative activities to (re)construct imaginaries that can foster or foreclose inter‐organisational change.