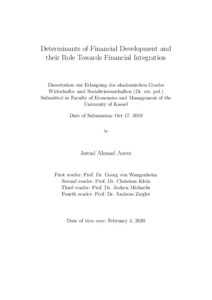 Determinants of Financial Development and their Role Towards Financial Integration