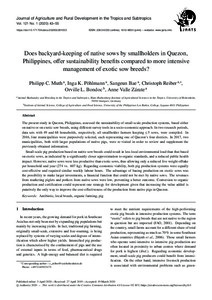 The present study in Quezon, Philippines, assessed the sustainability of small-scale production systems, based either on native or on exotic sow breeds, using different survey tools in a socio-economic approach. In two research periods, data sets with 49 households and 68 households, respectively, all smallholder farmers keeping ≤5 sows, were compiled. In 2016, four municipalities were purposively selected, each representing one of Quezon’s four districts. In 2017, two municipalities, both with larger populations of native pigs, were re-visited in order to review and supplement the previously obtained information.

Small-scale pig production based on native sow breeds could result in less local environmental load than that based on exotic sows, as indicated by significantly closer approximation to organic standards, and a reduced public health impact. However, native sows were less productive than exotic sows, thus allowing only a reduced live weight offtake per household and year (274 vs. 607 kg). Regarding economic viability, both pig production systems were equally cost-effective and required similar weekly labour hours. The advantage of basing production on exotic sows was the possibility to make larger investments, a financial function that could not be met by native sows. The revenues from marketing piglets and porkers from native sows were low, preventing a better outcome. Conversion to organic production and certification could represent one strategy for development given that increasing the value added is putatively the only way to improve the cost-effectiveness of the production from native pigs in Quezon.