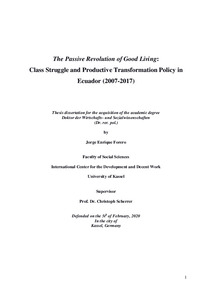 The Passive Revolution of Good Living

The PhD thesis "The Passive Revolution of Good Living: Class Struggle and Productive Transformation Policy in Ecuador (2007-2017)" suggests an interpretation of Ecuador's so-called ‘Citizens’ Revolution’ – CR – as the political project of a 'cadre fraction’: a ‘state class fraction’ whose legitimacy and political power is grounded in specialized knowledge and planning capabilities. Breaking the “catastrophic equilibrium” in which the anti-neoliberal forces and the dominant classes ended up at the beginning of the century turn, those cadres implemented a series of reforms aimed to weaken the dominant class fractions of the neoliberal stage. However, structural constrains and ideological shortcomings – some of the latter inherited from the antineoliberal social movements –, hindered the most radical potentialities of the political project.