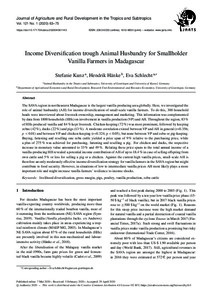 The SAVA region in northeastern Madagascar is the largest vanilla producing area globally. Here, we investigated the role of animal husbandry (AH) for income diversification of small-scale vanilla farmers. To do this, 300 household heads were interviewed about livestock ownership, management and marketing. This information was complemented by data from 1800 households (HHs) on involvement in vanilla production (VP) and AH. Throughout the region, 83 % of HHs produced vanilla and 84 % kept livestock. Chicken-keeping (72 %) was most prominent, followed by keeping zebus (42 %), ducks (22 %) and pigs (13 %). A moderate correlation existed between VP and AH in general (r=0.356; p < 0.01) and between VP and chicken-keeping (r=0.324; p < 0.05), but none between VP and zebu or pig-keeping. Buying, fattening and reselling one zebu cattle yielded a price span of 9 % relative to the purchasing price, while a plus of 275 % was achieved for purchasing, fattening and reselling a pig. For chicken and ducks, the respective increase in monetary value amounted to 33 % and 49 %. Relating these price spans to the total annual income of a vanilla-producing HH revealed a potential income contribution of AH of up to 18.4 % in case of selling offspring from own cattle and 5 % or less for selling a pig or a chicken. Against the current high vanilla prices, small-scale AH is therefore an only moderately effective income diversification strategy for vanilla farmers in the SAVA region but might contribute to food security. However, in situations of low to intermediate vanilla prices AH most likely plays a more important role and might increase vanilla farmers´ resilience to income shocks.