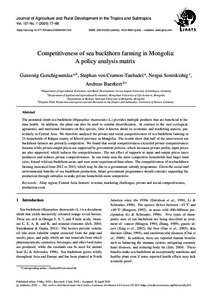 Sea buckthorn (Hippophae rhamnoides L.) provides multiple products that are beneficial to human health. In addition, the plant is also used to combat desertification. In contrast to the vast ecological, agronomic and nutritional literature on this species, little is known about its economic and marketing aspects, particularly in Central Asia. We therefore analysed the private and social competitiveness of sea buckthorn farming in 21 households of Bulgan county of Khovd province in Mongolia. The results show that half of the interviewed sea buckthorn farmers are privately competitive. We found that social competitiveness exceeded private competitiveness because while private output prices are supported by government policies, which increases private profits, input prices are also supported, which reduces the competitiveness. The net effect of supports to input and output prices taxes producers and reduces private competitiveness. In our study area the most competitive households had larger land sizes, fenced wild sea buckthorn areas, and were more experienced than others. The competitiveness of sea buckthorn farming increased from 2012 to 2013, which may be due to a government support programme. The most serious challenge facing sea buckthorn production is lack of finance, which is mirrored by the fact that investment costs contribute more than one third to total costs.