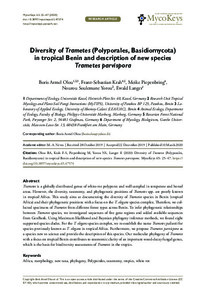 Trametes is a globally distributed genus of white-rot polypores and well sampled in temperate and boreal areas. However, the diversity, taxonomy, and phylogenetic positions of Trametes spp. are poorly known in tropical Africa. This study aims at documenting the diversity of Trametes species in Benin (tropical Africa) and their phylogenetic positions with a focus on the T. elegans species complex. Therefore, we collected specimens of Trametes from different forest types across Benin. To infer phylogenetic relationships between Trametes species, we investigated sequences of five gene regions and added available sequences from GenBank. Using Maximum likelihood and Bayesian phylogeny inference methods, we found eight supported species clades. For the T. elegans species complex, we re-establish the name Trametes palisotii for species previously known as T. elegans in tropical Africa. Furthermore, we propose Trametes parvispora as a species new to science and provide the description of this species. Our molecular phylogeny of Trametes with a focus on tropical Benin contributes to taxonomic clarity of an important wood-decay fungal genus, which is the basis for biodiversity assessments of Trametes in the tropics.