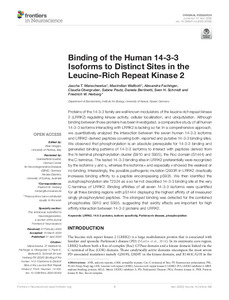 Proteins of the 14-3-3 family are well known modulators of the leucine-rich repeat kinase 2 (LRRK2) regulating kinase activity, cellular localization, and ubiquitylation. Although binding between those proteins has been investigated, a comparative study of all human 14-3-3 isoforms interacting with LRRK2 is lacking so far. In a comprehensive approach, we quantitatively analyzed the interaction between the seven human 14-3-3 isoforms and LRRK2-derived peptides covering both, reported and putative 14-3-3 binding sites. We observed that phosphorylation is an absolute prerequisite for 14-3-3 binding and generated binding patterns of 14-3-3 isoforms to interact with peptides derived from the N-terminal phosphorylation cluster (S910 and S935), the Roc domain (S1444) and the C-terminus. The tested 14-3-3 binding sites in LRRK2 preferentially were recognized by the isoforms γ and η, whereas the isoforms ϵ and especially σ showed the weakest or no binding. Interestingly, the possible pathogenic mutation Q930R in LRRK2 drastically increases binding affinity to a peptide encompassing pS935. We then identified the autophosphorylation site T2524 as a so far not described 14-3-3 binding site at the very C-terminus of LRRK2. Binding affinities of all seven 14-3-3 isoforms were quantified for all three binding regions with pS1444 displaying the highest affinity of all measured singly phosphorylated peptides. The strongest binding was detected for the combined phosphosites S910 and S935, suggesting that avidity effects are important for high affinity interaction between 14-3-3 proteins and LRRK2.