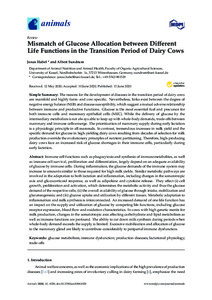 Simple Summary
The reasons for the development of diseases in the transition period of dairy cows are manifold and highly farm- and cow-specific. Nevertheless, links exist between the degree of negative energy balance (NEB) and disease susceptibility, which suggest a mutual adverse relationship between immune and productive functions. Glucose is the most essential fuel and precursor for both immune cells and mammary epithelial cells (MEC). While the delivery of glucose by the intermediary metabolism is not always able to keep up with whole-body demands, trade-offs between mammary and immune cells emerge. The prioritization of mammary supply during early lactation is a physiologic principle in all mammals. In contrast, tremendous increases in milk yield and the specific demand for glucose in high-yielding dairy cows resulting from decades of selection for milk production override the evolutionary principles of nutrient partitioning. Therefore, high-producing dairy cows face an increased risk of glucose shortages in their immune cells, particularly during early lactation.

Abstract
Immune cell functions such as phagocytosis and synthesis of immunometabolites, as well as immune cell survival, proliferation and differentiation, largely depend on an adequate availability of glucose by immune cells. During inflammation, the glucose demands of the immune system may increase to amounts similar to those required for high milk yields. Similar metabolic pathways are involved in the adaptation to both lactation and inflammation, including changes in the somatotropic axis and glucocorticoid response, as well as adipokine and cytokine release. They affect (i) cell growth, proliferation and activation, which determines the metabolic activity and thus the glucose demand of the respective cells; (ii) the overall availability of glucose through intake, mobilization and gluconeogenesis; and (iii) glucose uptake and utilization by different tissues. Metabolic adaptation to inflammation and milk synthesis is interconnected. An increased demand of one life function has an impact on the supply and utilization of glucose by competing life functions, including glucose receptor expression, blood flow and oxidation characteristics. In cows with high genetic merits for milk production, changes in the somatotropic axis affecting carbohydrate and lipid metabolism as well as immune functions are profound. The ability to cut down milk synthesis during periods when whole-body demand exceeds the supply is limited. Excessive mobilization and allocation of glucose to the mammary gland are likely to contribute considerably to peripartal immune dysfunction.