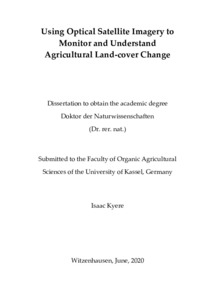 The activities of humans have transformed the earth over the last decades. The transformation is estimated to increase further in response to the growing world population. This has caused many countries to devise means to utilize resources sustainably. Bio-economy is seen as a means to reduce the high reliance on fossil materials and ensure the provision of raw materials, energy and food to the increasing world population in a sustainable manner. However, the rising demands for biomass to produce bioenergy have relied on agriculture.
Given its high energy yield, maize, for example, is the most dominant energy crop used for biogas production in Germany and within the EU. As a result, maize is continuously cultivated in large quantities on productive arable lands for biogas silage. The intensified cropping of monocultures of maize involves the use of high amounts of chemical fertilizers and pesticides. These developments have raised concerns about agricultural land-cover change and biodiversity loss. Therefore, systematic monitoring and modelling of agricultural lands are essential to understand better and address these concerns and for policy directions and future planning. The success of agricultural land-cover monitoring and modelling depends on the availability of data. Optical satellite remote sensing offers frequent and reliable data of our environment, and this has been used for multiple studies on land-use and land-cover change. But not much has been done in the area of agricultural land-cover and its changes, relative to bio-economy like biogas production. Thus, the present thesis contributed to the above-mentioned research gap by using Landsat and Sentinel-2 satellite images to understand agricultural land-cover and its changes in space and time.
Land-cover classification or prediction forms the basis for satellite-based land-cover change detection. Further, a robust model is necessary for accurate land-cover predictions in a period of interest. However, satellite-based crop type mapping is challenged by its dependence on field data (i.e. for calibration and validation). In Europe, the Integrated Administration and Control System (IACS) spatial data, submitted by farmers who apply for subsidies, solves the problem of regular field surveys needed for satellite-based crop type mapping. Chapter 3 of the thesis was dedicated to the development of a robust and generalized Landsat-based crop-type prediction model, calibrated and validated using the IACS data. A generalized model is particularly important when prediction beyond the calibration data becomes a necessity. Two modelling approaches called multi-year (MY) and single-year (SY) calibrations based on the random forest algorithm (RF) were assessed. The MY and SY modelling were based on multi-temporal spectral information (i.e., early and late summer seasons) from six bands of Landsat images as well as four vegetation indices from six different years. The MY model was repeatedly calibrated based on the five years’ spectral information while one year was left out entirely to test the model’s robustness in the prediction of grassland, maize, summer crops and winter crops. SY models were calibrated with spectral information of just one year and validated based on the years not included in the calibration. The independent validation of MY and SY resulted in overall accuracies of 77.3% and 71.5% respectively, indicating a better performance and robustness of the former.
The assessment of where and when changes occurred is a prerequisite for understanding the underlying causes of the changes. Thus, the generalized MY model was employed in chapter 4 to map agricultural lands-cover of Northern Hesse. The changes in land-cover and biodiversity of agricultural fields were evaluated. The results showed that from 2000 to 2015, the area of grassland (-5.7%) and summer crops (-5.8%) decreased, while the area of winter crops and maize increased by 9.2% and 2.2%, respectively. The mean capacity of biogas plants (MBC) and topographical features like mean elevation and slope were employed as predictor variables. These predictors information on a municipality level were used in multiple linear regression models as possible drivers of the changes in maize area (MA) and field edge density (ED), which is an indicator for species and habitat diversity. The MBC and elevation were the most significant drivers of change in MA (p < 0.05), while MBC and slope were the significant drivers of the change in ED. The area of maize increased with an increasing MBC at lower elevations of the study area (p < 0.05). A decrease in the ED of fields was observed, and this was very much associated with the extent of maize and winter crops’ production.
Moreover, the combination of two or more optical satellite sensor data facilitates the derivation of a dense time series needed for an accurate prediction of diverse crops with different phenology. Hence, chapter 5 employed the Harmonized Landsat and Sentinel-2 data, which is a product from the Landsat and Sentinel-2 sensors to improve the MY model. A crop prediction model was built based on the RF algorithm and target-oriented cross-validation (TOV). Phenological metrics, spectral and topographic information were employed as model predictors. A forward feature selection (FFS) procedure, resulted in a final selection of only 16 of the predictors as relevant to the prediction of 13 crops. An independent assessment of the model based on the outcome of the FFS showed an overall model performance of 76%. Most of the predicted crops also achieved high user’s and producer’s accuracies (> 80%). However, the prediction performance of crops like potato, summer oat and winter triticale was comparatively low (< 60%). Different models were further developed based on the combination of different predictors variables selected during the FFS to assess the contribution of the predictors in discriminating the 13 crops. While topographic information did not improve the overall model performance, the inclusion of phenological metrics contributed positively to the accuracy of the model.
Finally, it can be concluded that the use of time series and multi-sensor optical satellite data, coupled with a robust machine learning algorithm, can help develop models to classify agricultural land-cover. Further, it was demonstrated that multiple-year model, based on multi-temporal optical satellite data facilitates the detection of agricultural land-cover and biodiversity changes relative to bioenergy production.