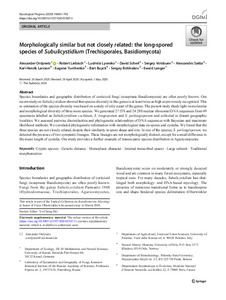 Species boundaries and geographic distribution of corticioid fungi (resupinate Basidiomycota) are often poorly known. Ourrecent study onSubulicystidiumshowed that species diversity in this genus is at least twice as high as previously recognized. Thisre-estimation of the species diversity was based on a study of only a part of the genus. The present study sheds light on molecularand morphological diversity of three more species. We generated 27 ITS and 24 28S nuclear ribosomal DNA sequences from 49specimens labelled asSubulicystidium cochleum,S. longisporumandS. perlongisporumand collected in distant geographiclocalities. We assessed pairwise dissimilarities and phylogenetic relationships of DNA sequences with Bayesian and maximumlikelihood methods. We correlated phylogenetic information with morphological data on spores and cystidia. We found that thethree species are not closely related, despite their similarity in spore shape and size. In one of the species,S. perlongisporum,wedetected the presence of two sympatric lineages. These lineages are not morphologically distinct, except for a small difference inthe mean length of cystidia. Our study provides a further example of transoceanic species distribution in Agaricomycetes