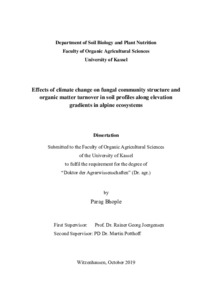 Although elevation patterns of diversity for plants and animals are well known, understanding of variations in fungal community structure along elevation gradients is limited. Soil fungi play an important role in soil microbial communities, where they improve soil organic matter (SOM) turnover and nutrient circulation. Hence, any change in fungal community structure will have strong effects on soil and ecosystem functioning. The main purpose of this thesis is therefore to investigate how climate induced shifts in community structure, biomass and residue of soil fungi could explain organic matter turnover as well as carbon (C) and nitrogen (N) dynamics along elevation and soil depth gradients in contrasting alpine ecosystem sites in Austria, that differ only in bedrock and vegetation but have similar climate along elevation levels. The objective was to further investigate fungal community structure and analyse the influencing factors. Thus, in this thesis, various approaches such as Illumina-platform based Next Generation Sequencing of standard marker for fungi, internal transcribed spacer (ITS2) region, and chemical and biochemical methods, were combined. This helped to characterize fungal diversity, soil and microbial nutrient pools of C and N, soil microbial biomass, residues, and activities as well as factors affecting microbial properties in alpine elevation gradient soils.

1. Briefly, simultaneous elevation and soil depth gradients study at two contrasting alpine ecosystem sites having differences in vegetation and bedrock material offered unique opportunity to understand adaptation of microbial communities to local habitat and their pattern through natural gradients of soil conditions with comparison perspective. The results of our first study indicate increasing stocks of MBC with increasing elevations in alkaline and acidic sites and, of MBN following changes in SOC and total N stocks except at low elevation in alkaline site. Also, the alkaline site had higher stocks of fungal biomass ergosterol at all elevation levels compared to those in acidic site. Whereas the contents of SOC, total N, MBC, MBN and ergosterol decreased with depths at all elevations in both sites. The study further demonstrated variations in soil microbial properties driven more strongly by soil chemical properties than environmental variables, suggesting profound control of soil abiotic factors on variations in microbial community structure in two different elevation gradient sites in the Alps. The accumulation of SOC in presence of higher microbial biomass especially of saprotrophic fungi reflect astonishing phenomenon of retarded plant residue decomposition in alkaline site Hochschwab especially at low and mid elevation levels than at acidic site Rauris.

2. In the second study, in alkaline site Hochschwab, microbial necromass formation was reduced in comparison to acidic site Rauris, which is another strong indication of retarded microbial plant residue decomposition. The other reason for such decomposition retardation can also be the drastically decreased biomass-specific phenoloxidase and peroxidase enzyme activities and lower levels of phosphatase activities in alkaline compared to those in the acidic site. However, in both sites, fungi dominated microbial biomass and necromass, but the dominance was stronger in the alkaline site. This study presented that climatic effects along alpine elevation gradients depend on vegetation induced changes in soil properties, which interact with bedrock properties. Thus, the differences in physical breakdown of parent material and C input via root and litter from dominating tree species in acidic and alkaline sites respectively might lead to differences in fungal community structure between the two sites which needed further investigation at genomic level.

3. Consequently, our third study concerning metagenomic sequencing of fungal ITS2 biomarker gene showed that the diversity of soil fungi at both sites, was in the order of phylum Ascomycota > Basidiomycota > Zygomycota. In terms of functional guilds, saprotrophism (Ascomycota) and symbiotrophism (Basidiomycota) dominated in both alkaline site (Hochschwab) and acidic site (Rauris). The correlation analyses further indicated significant effects of environmental factors (elevations, mean annual temperature (MAT) and mean annual precipitation (MAP)) on overall fungal community structure followed by edaphic factors (soil pH, SOC) at both sites. Additionally, only at alkaline site, soil C/N ratio significantly correlated with fungal community structure. The variation in main fungal classes and their driving factors at the two contrasting alpine sites suggest that their shifts may be driven by complex microbial interaction with elevation related environmental factors.
The work in current thesis presents important role of fungal communities’ in ecosystem processes such as SOM turnover and C sequestration in high mountain alpine sites, under changing climatic conditions. In next steps it will be helpful to extend the research to more elevation levels and deeper soil depths and at more alpine sites containing different bedrock material and vegetation, but similar climate. This will further help to discern the combined effects of soil mineral characteristics and different litter and C input under climate change scenario. Also, knowledge on functional diversity of soil fungi and on transition in fungal communities might be strengthened using metatranscriptomic or metaproteomic techniques of quantifying the decomposer gene. Nevertheless, the important data generated in my thesis can be used for model development in order to understand soil microbial ecology and ecosystem management and to establish better links between them. Finally, in line with the earlier studies, the work in this thesis furthers our understanding that effects of climate warming in the Alps are impossible to overlook.