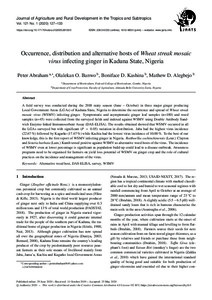 A field survey was conducted during the 2018 rainy season (June – October) in three major ginger producing Local Government Areas (LGAs) of Kaduna State, Nigeria to determine the occurrence and spread of wheat streak mosaic virus (WSMV) infecting ginger. Symptomatic and asymptomatic ginger leaf samples (n=180) and weed samples (n=45) were collected from the surveyed fields and indexed against WSMV using Double Antibody Sandwich Enzyme-linked Immunosorbent Assay (DAS-ELISA). The results obtained showed that WSMV occurred in all the LGAs surveyed but with significant (P = 0.05) variation in distribution. Jaba had the highest virus incidence (22.67\,\%) followed by Kagarko (17.67\,\%) while Kachia had the lowest virus incidence of 10.00\,\%. To the best of our knowledge, this is the first report of WSMV infecting ginger in Nigeria. Rottboellia cochinchinensis (Lour.) Clayton and Setaria barbata (Lam.) Kunth tested positive against WSMV as alternative weed hosts of the virus. The incidence of WSMV even at lower percentage is significant as population build-up could lead to a disease outbreak. Awareness programs need to be organised for farmers on yield loss potential of WSMV on ginger crop and the role of cultural practices on the incidence and management of the virus.

kup - kassel university press  (Digitale Bibliotheksdienste)
Vol 121, No 1 (2020)  (Journal of Agriculture and Rural Development in the Tropics and Subtropics (JARTS))