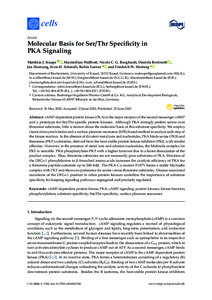 cAMP-dependent protein kinase (PKA) is the major receptor of the second messenger cAMP and a prototype for Ser/Thr-specific protein kinases. Although PKA strongly prefers serine over threonine substrates, little is known about the molecular basis of this substrate specificity. We employ classical enzyme kinetics and a surface plasmon resonance (SPR)-based method to analyze each step of the kinase reaction. In the absence of divalent metal ions and nucleotides, PKA binds serine (PKS) and threonine (PKT) substrates, derived from the heat-stable protein kinase inhibitor (PKI), with similar affinities. However, in the presence of metal ions and adenine nucleotides, the Michaelis complex for PKT is unstable. PKA phosphorylates PKT with a higher turnover due to a faster dissociation of the product complex. Thus, threonine substrates are not necessarily poor substrates of PKA. Mutation of the DFG+1 phenylalanine to β-branched amino acids increases the catalytic efficiency of PKA for a threonine peptide substrate up to 200-fold. The PKA Cα mutant F187V forms a stable Michaelis complex with PKT and shows no preference for serine versus threonine substrates. Disease-associated mutations of the DFG+1 position in other protein kinases underline the importance of substrate specificity for keeping signaling pathways segregated and precisely regulated.