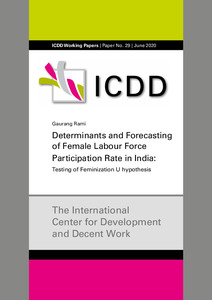 Determinants and Forecasting of Female Labour Force Participation Rate in India: Testing of Feminization U hypothesis

Greater involvement of women within the labour force has economic and social impact.
The Female Labour Force Participation Rate (FLFPR) for India remains appallingly low
at around 27%, while the male labour force participation rate has been 79.9%. In India,
during 1990–2016, the FLFPR (% of female population age 15+) showed a declining trend.
In this paper, the determinants of FLFPR for India have been estimated using regression
analysis for the time period 1990–2016. Data on all the relevant variables have been
taken from World Development Indicators, World Bank. It has been found that FLFPR
has strong negative linear correlation with LN GDP (constant 2010 US$), LN GDP per
capita, PPP (constant 2011 international $), female tertiary school enrollment (% gross),
and literacy rate and young female (% of females age 15–24). Results of regression
analysis suggest that 87.9% variations in LFPR (% of female population age 15+) in India
are explained by independent variables together. To forecast FLFPR, time series analysis
with Auto Regressive Integrated Moving Average (ARIMA) has been applied. The ARIMA
(1,2,0) model has been found to be the most suitable for forecasting value of FLFPR (for
both, in-sample and out-sample). As per out-sample forecast, FLFPR in India will have
increasing trend and it will be around 33.55% in 2035. From the results of trend analysis,
scatter plot and correlation analysis, it can be concluded that the declining phase of
Feminization U hypothesis has clearly been explained in India during 1990–2016. Results
of curvilinear regression and out-sample forecast up to 2035, using the ARIMA technique,
suggests that FLFPR (% of female population aged 15+) will have increasing trend; this
may explain increasing phase of Feminization U hypothesis in India. To conclude, Feminization
U hypothesis in India has been partially reinforced and it will be fully supported
if forecasting of FLFPR (% of female population age 15+), LN GDP (constant 2010 US$),
and LN GDP per capita, PPP (constant 2011 international $) are true. The aim is not only to
increase participation of females in labour force, but to create an environment, providing
opportunities and freedom for women to attain decent and dignified work which will
contribute significantly in the economic empowerment and the holistic development of
women, thereby ensuring gender equity in the labour market in India.