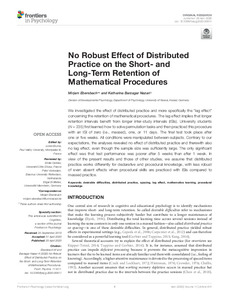 We investigated the effect of distributed practice and more specifically the “lag effect” concerning the retention of mathematical procedures. The lag effect implies that longer retention intervals benefit from longer inter-study intervals (ISIs). University students (N = 235) first learned how to solve permutation tasks and then practiced this procedure with an ISI of zero (i.e., massed), one, or 11 days. The final test took place after one or five weeks. All conditions were manipulated between-subjects. Contrary to our expectations, the analyses revealed no effect of distributed practice and therewith also no lag effect, even though the sample size was sufficiently large. The only significant effect was that test performance was poorer after 5 weeks than after 1 week. In view of the present results and those of other studies, we assume that distributed practice works differently for declarative and procedural knowledge, with less robust of even absent effects when procedural skills are practiced with ISIs compared to massed practice.