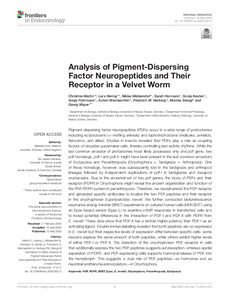 Pigment-dispersing factor neuropeptides (PDFs) occur in a wide range of protostomes including ecdysozoans (= molting animals) and lophotrochozoans (mollusks, annelids, flatworms, and allies). Studies in insects revealed that PDFs play a role as coupling factors of circadian pacemaker cells, thereby controlling rest-activity rhythms. While the last common ancestor of protostomes most likely possessed only one pdf gene, two pdf homologs, pdf-I and pdf-II, might have been present in the last common ancestors of Ecdysozoa and Panarthropoda (Onychophora + Tardigrada + Arthropoda). One of these homologs, however, was subsequently lost in the tardigrade and arthropod lineages followed by independent duplications of pdf-I in tardigrades and decapod crustaceans. Due to the ancestral set of two pdf genes, the study of PDFs and their receptor (PDFR) in Onychophora might reveal the ancient organization and function of the PDF/PDFR system in panarthropods. Therefore, we deorphanized the PDF receptor and generated specific antibodies to localize the two PDF peptides and their receptor in the onychophoran Euperipatoides rowelli. We further conducted bioluminescence resonance energy transfer (BRET) experiments on cultured human cells (HEK293T) using an Epac-based sensor (Epac-L) to examine cAMP responses in transfected cells and to reveal potential differences in the interaction of PDF-I and PDF-II with PDFR from E. rowelli. These data show that PDF-II has a tenfold higher potency than PDF-I as an activating ligand. Double immunolabeling revealed that both peptides are co-expressed in E. rowelli but their respective levels of expression differ between specific cells: some neurons express the same amount of both peptides, while others exhibit higher levels of either PDF-I or PDF-II. The detection of the onychophoran PDF receptor in cells that additionally express the two PDF peptides suggests autoreception, whereas spatial separation of PDFR- and PDF-expressing cells supports hormonal release of PDF into the hemolymph. This suggests a dual role of PDF peptides—as hormones and as neurotransmitters/neuromodulators—in Onychophora.