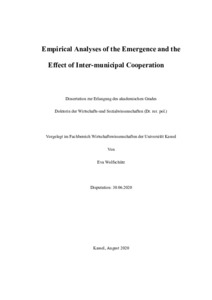 This dissertation presents four empirical studies on inter-municipal cooperation (IMC). IMC gained prominence lately as alternative to local government reform. As local decision makers grow weary of the political costs of amalgamations and discouraging empirical evidence on the effectiveness of such reforms, IMC promises a more flexible approach to the provision of public goods and services.
What are the factors that drive the emergence of IMC? This question is answered by way of survival analysis, using data of West-German municipalities. The thesis first focusses on factors explaining the emergence of IMC in the field of internal administration. Findings suggest that clusters of shrinking municipalities are more likely to engage in IMC. Furthermore, IMC is more likely to emerge in local election years among fiscally strong municipalities. A second study deals with the establishment of inter-local business parks. Results show that municipalities that set lower (higher) business (land) tax multipliers are more likely to build inter-local business parks. This finding suggests that IMC provides a platform for mitigating local competition for mobile capital. Another finding shows that state support for IMC positively correlates with the emergence of IMC.
Does IMC help improve local economic performance? After introducing inverse probability of treatment weighting to the study of IMC effects, findings for German municipalities suggest that IMC in the field of local business development has a negative impact on unemployment and a long term positive effect on tax revenues. These findings, however, cannot be replicated in a second study on IMC among polish municipalities.