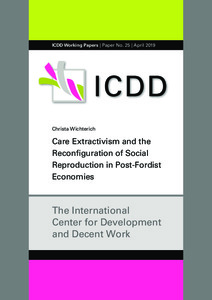 This paper suggests the concept of care extractivism as a space- and time-diagnostic tool to international political economics in post-fordist societies. Analogous to resourceextractivism, care extractivism depicts the intensified commodification of social reproduction and care work along social hierarchies of gender, class, race and North-Southas a strategy to cope with a crisis of social reproduction. Extractivist policies result in the creation of a cheap reproductive labour force.The paper analyses the current national and transnational reconfiguration of social and biological reproduction in Germany / Western Europe interacting with Eastern Europe and Asia. Currently, the most striking features of care extractivism are a) professionalisation for efficiency increase, b) transnationalisation based on import of care workers, and c) transnationalisation of biological reproduction based on reproductive technologies. The contradiction between the rationale of care and the neoliberal capitalist market logic results in frequent care struggles such as the protests of hospital nurses against thedepletion of care resources. The politisation of care by the protesting care workers asks for giving preference to the care economy as a common good over care as a commodity.