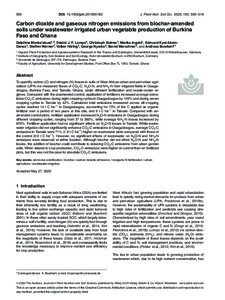 To quantify carbon (C) and nitrogen (N) losses in soils of West African urban and peri‐urban agriculture (UPA) we measured fluxes of CO₂‐C, N₂O‐N, and NH₃‐N from irrigated fields in Ouagadougou, Burkina Faso, and Tamale, Ghana, under different fertilization and (waste‐)water regimes. Compared with the unamended control, application of fertilizers increased average cumulative CO₂‐C emissions during eight cropping cycles in Ouagadougou by 103% and during seven cropping cycles in Tamale by 42%. Calculated total emissions measured across all cropping cycles reached 14 t C ha⁻¹ in Ouagadougou, accounting for 73% of the C applied as organic fertilizer over a period of two years at this site, and 9 t C ha⁻¹ in Tamale. Compared with unamended control plots, fertilizer application increased N₂O‐N emissions in Ouagadougou during different cropping cycles, ranging from 37 to 360%, while average NH₃‐N losses increased by 670%. Fertilizer application had no significant effects on N₂O‐N losses in Tamale. While wastewater irrigation did not significantly enhance CO₂‐C emissions in Ouagadougou, average CO₂‐C emissions in Tamale were 71% (1.6 t C ha⁻¹) higher on wastewater plots compared with those of the control (0.9 t C ha⁻¹). However, no significant effects of wastewater on N₂O‐N and NH₃‐N emissions were observed at either location. Although biochar did not affect N₂O‐N and NH₃‐N losses, the addition of biochar could contribute to reducing CO₂‐C emissions from urban garden soils. When related to crop production, CO₂‐C emissions were higher on control than on fertilized plots, but this was not the case for absolute CO₂‐C emissions.